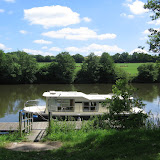 We traversed over 100km of La Mayenne and La Sarthe rivers, upstream and down. I can't retrain my ageing brain to touch type using a French keyboard so a full account of our voyages will have to wait until we return. Suffice to say that travelling in Europe by canal and/or river has been a lifelong dream for both of us, and this trip met all expectations.

Our choice of rivers meant that we visited lots of picturesque villages and a few small towns, with internet access therefore hard to come by. Hence the paucity of blog posts while we were afloat. See later posting for more details of where we went.

Sketches of Spain I

Clothes: young Spanish seem more fashion conscious than the French, but don´t always dress as well - one sees the occasional clothing disaster, up-to-the-minute fashion that doesn´t suit the wearer. Pink shirts are in for men, windows are full of them and we see quite a few being worn as well. Glasses (ordinary, not sunglasses) are an important fashion accessory for the smart young man. Sideburns are in. No one, male or female, wears hats of any kind, despite the sun. No baseball caps, none of the hats currently in fashion for cool young guys in Melbourne. Only the Japanese tourists in their inverted flowerpot hats have covered heads.

Architecture: Juliet balconies everywhere, about a foot deep. Almost every window has one, even in hotel rooms, although the apartment we are renting in Barcelona has, unusually, a very large balcony with table, chairs and a place to hang washing, pegs supplied.

As one of our guidebooks says, the Spanish eat to live, not the other way round, and at first we were a bit disappointed by the food. We found one excellent tapas bar in Salamanca, but apart from that we had to wait until Barcelona to find really interesting gourmet food. Barcelona also has more non-smoking restaurants, and caters for vegetarians.

Traffic lights: Spanish lights cheep to indicate that the pedestrian light is green. It begins as "cheep...cheep..." then switches to "cheep cheep cheep" when you need to start running. And you really do. Unlike our long periods of flashing and non-flashing red before the lights change, in Spain you barely get time to finish crossing once the light starts to flash. As a result pedestrian behaviour is much better: no one starts crossing unless they are confident that the light has only recently changed to green.

Traffic: Despite dire warnings, we didn't find driving in Spain worse than France. French drivers are more likely to observe the speed limits, especially temporary ones for road works, but drivers in both countries are more tolerant of last-minute lane changes than driversin Oz. We note that the favoured marque of the lawless who drive at speeds of 150-200kph on the motorways is a black Audi. By the time you discern the distinctive four rings in the rearview mirror, you have about 2 seconds to move out of the overtaking lane.

Posted by Nahani-mate at 6:22 AM No comments:

(With apologies to nephew Nick who wrote a song of the same name).

We thought France was civilised because days start and finish late: parking meter restrictions don´t start until 0900 and break for lunch between 1200 and 1400, restaurants don´t start serving until 2000. Spain is even more suited to night owls like us - we can get out of bed at between 0800 and 0900, check our messages and mail and do the odd bit of washing or eat breakfast, start the morning activities as late as 1100 and still have 3 hours of sightseeing or whatever before lunch at 1400. Suits us fine.

When dusk falls at about 2100, it´s time to look for somewhere to eat an evening meal, and one might still be sitting in a square with a drink or the last stages of a meal close to midnight. And it´s a game the whole family plays - in Salamanca we were wondering whether we might have left it a bit late to find a restaurant still serving when we sat down at 2200 on our second night in Spain, but within a few minutes an extended family of a dozen people including a pre-teen and child of about two sat down at the next table. We recently made a one night stop at a modern hotel conveniently close to the motorway route from Granada to Barcelona, and again felt uncomfortable when we were the sole occupants of its large restaurant at 2130. By the time we left after a very good fixed price meal, it had a small crowd of other diners, including a family. Back at the parking meters, in Spain they don´t start until 1000, and also take a mid-afternoon break like the French ones do, but of varying length. They must have complex internal programs, as you can still put in money to cover the whole day, including the break, as we did in Toledo.

Posted by Nahani-mate at 6:03 AM No comments:

Four nights in Toledo, three days in the wonderful art galleries of Madrid: Monday Reina Sofia, Tuesday Prado, Wednesday Thyssen-Bornemisza. We commuted from Toledo on the fast train, which takes half an hour in an air-conditioned reserved seat and lands you at Atocha station, conveniently close to all three museums. As well as all the wonderful art, the galleries are cool, quiet and smoke-free which was welcome as the temperature was in the mid-30s each day. We didn´t find the heat oppressive unless we were walking in direct sunlight, but by the time we walked back from the station to our Toledo hotel each evening, we were always hot and tired. The hotel was pleasant and quiet with cheap parking on the street and we think it was a good alternative to staying in Madrid proper.

When not improving our minds with the huge range of art in Madrid we made the statutory trips to Plaza Major and Plaza del Sol in Madrid, but were unimpressed: the squares were less attractive than those in Vitoria and much less attractive than Salamanca, and the shopping streets didn´t compare with San Sebastian or Vitoria. We did like the gardens of Buen Retiro, where we escaped for a sit down in the shade. We mastered the Metro and used it to visit Cecilia O´Dwyer, Provincial (head) of the Loreto sisters in Spain. She is a friend of our friend Liz Hepburn. We really enjoyed an opportunity to lunch with her and have a serious conversation with someone other than one another.

Toledo itself is a complete contrast to Madrid - a mediaeval town still largely contained within the old walls. We walked around getting pleasantly lost in the labyrinth of narrow streets a couple of times, and took the tourist train trip around the perimeter on the other side of the Tajo river which forms a natural boundary on three sides. It is somewhat surprising that cars are still allowed within the walls, but they are and they travel through all but the narrowest streets, somewhat reducing your walking pleasure as you are constantly on guard against a car whizzing up behind you.

Posted by Nahani-mate at 1:11 AM No comments:

Nahani-mate
Mate of cruising yacht Nahani. For more about the ship, the crew, and the voyages, try the Nahani website, www.nahani.info. When not sailing, either travelling (see VorraThorneVacances blog) or living in Albert Park (see VorraThorneRenos)